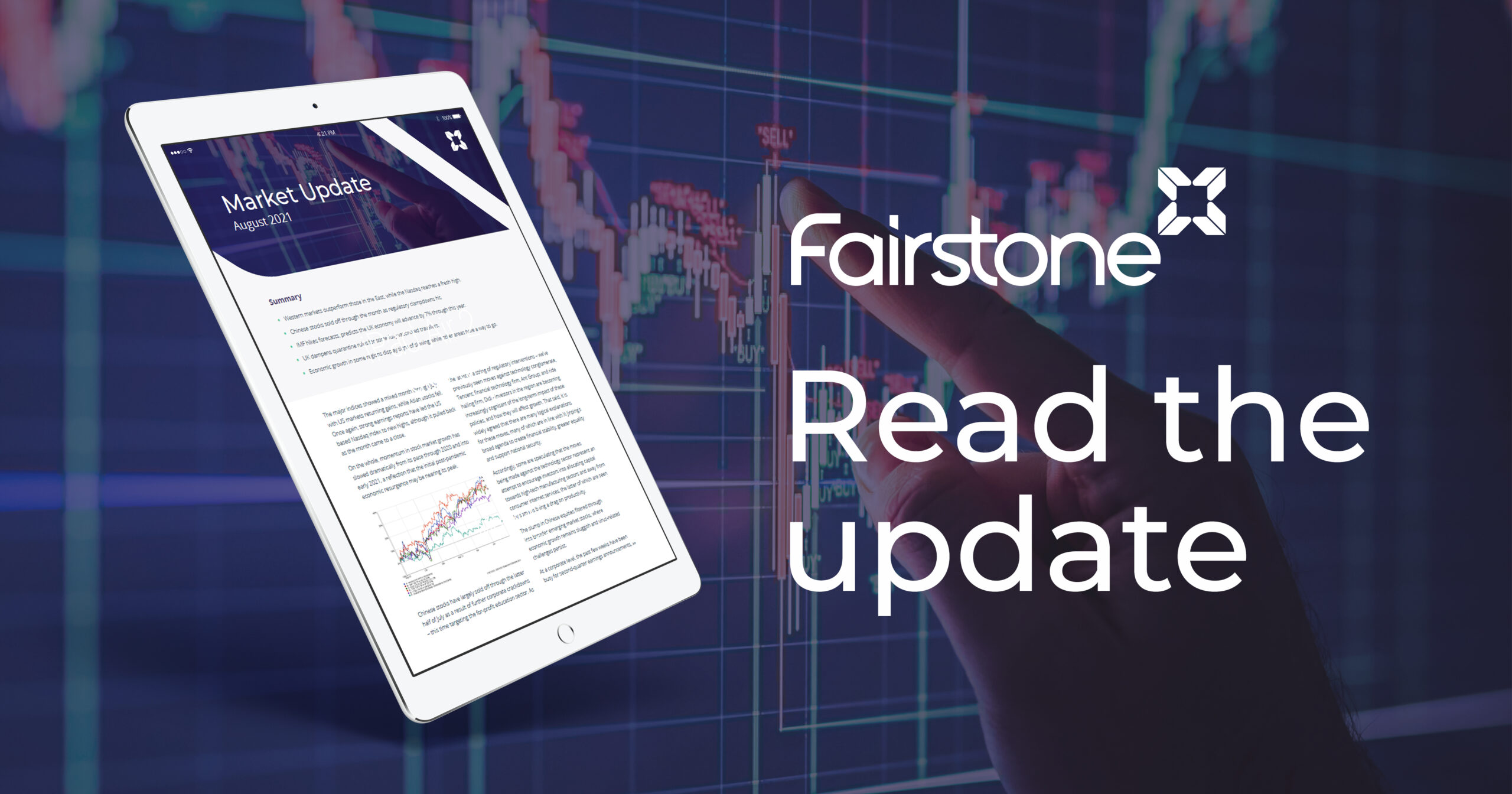 After a standout September, Japanese equities moderated through October as new Liberal Democratic Party (LDP) leader Fumio Kishida saw a slightly unsteady start to his tenure after proposing plans for wealth redistribution. He backed the lifting of wages in a policy he called a ‘new type of Japanese capitalism’, with implied support for higher capital gains taxes, said he could favour tax incentives for companies that raised wages instead of just dividends, and promised to rethink the taxation of investment income.

While Japan has a lower income inequality gap than other developed nations including the US and UK, corporate cost cutting has created an increasingly large underclass of temporary employees, with some 40% of Japan’s workforce now having part-time or contract jobs that pay on average one third less than what full-timers make.

However, following a negative market reaction, Kishida subsequently rowed back from his initial comments, stating that he wasn’t thinking of reviewing the nations’ capital gains taxes for now. This allowed for a modicum of recovery in Japanese stocks, though they still ended the month below other regions in Pound terms, impacted further by a weaker Yen:

Despite this uncertainty, the LDP won a significant mandate in October 31st’s general election, outperforming expectations to lose just 15 seats and emerging with a 261-seat majority, in the process giving Kishida the public support he did not get when he first took office.

US equities performed best during the month, supported by a strong start to the Q3 earnings season, with more than 80% of companies beating earnings expectations helping to drive the S&P 500 to a new all-time high. It was not all plain sailing, however, as the popular tech giants reported mixed pictures – Amazon missing consensus estimates for both revenues and profits, and Apple missing consensus revenue estimates for the first time in 4 years – citing supply constraints amongst other issues.

Fixed income markets were volatile, with inflationary pressures chief among concerns given persistent supply chain bottlenecks and high energy prices. The 10-year US Treasury yield hit a high of 1.7%, with other countries seeing much larger yield increases as central bank policies came under pressure.

In the UK, Rishi Sunak’s budget was helped by large revisions to the Office for Budget Responsibility’s (OBR) economic and fiscal forecasts, with their estimate of pandemic-related economic ‘scarring’ cut to 2% from 3% previously. This may well yet fall further as the picture becomes clearer in coming years; indeed, the Bank of England estimate the level of scarring to be just 1%. The Chancellor chose to use this leeway on a spending boost for government departments, frontloaded over the next two years. The other most notable policy measure was a reduction in the taper rate and an increase in work allowances for Universal Credit. The planned measures give Sunak plenty of fiscal headroom looking ahead, which could well pave the way for a material loosening of policy prior to the next general election, probably in the form of tax cuts.

We remain generally positive on UK equity markets on a forward looking basis, with both consumer and particularly business confidence indicators remaining robust as shown in the chart below, and near-term challenges relating to Covid, Brexit and economic policy not expected to derail growth in 2022:

Additionally, valuations are compelling while earnings growth is strong , both relative to the UK’s own history, and to other regions, with the FTSE All-Share currently trading at a near-record valuation discount to the MSCI World Index – at the moment being the cheapest it has been relative to the global benchmark since the dot com bubble: 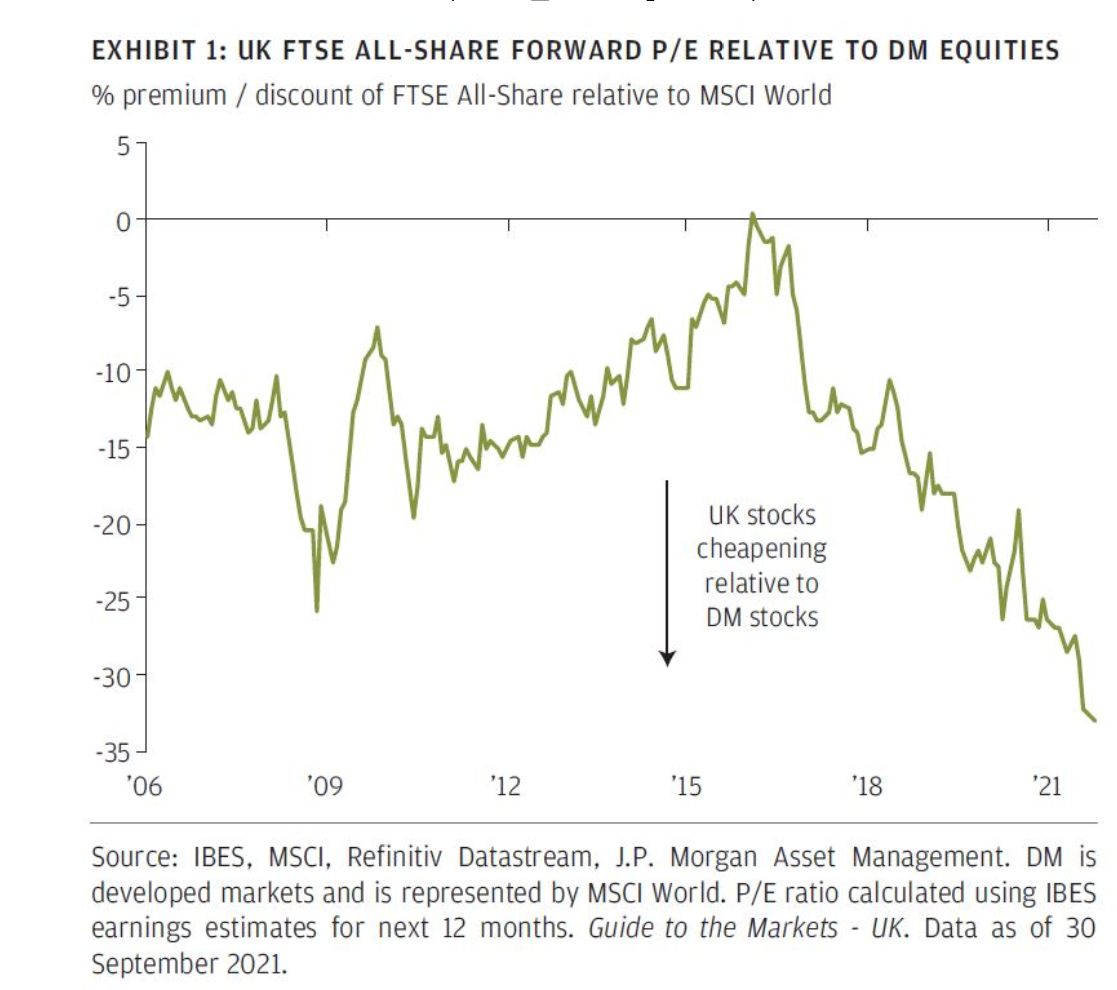 Part of this differential relates to the underlying composition of the UK equity market relative to others, with the UK having a much lower weighting to technology companies versus the US, for example. However, as the next chart shows, even on a sector-by-sector basis, the UK is still generally much cheaper than other markets: 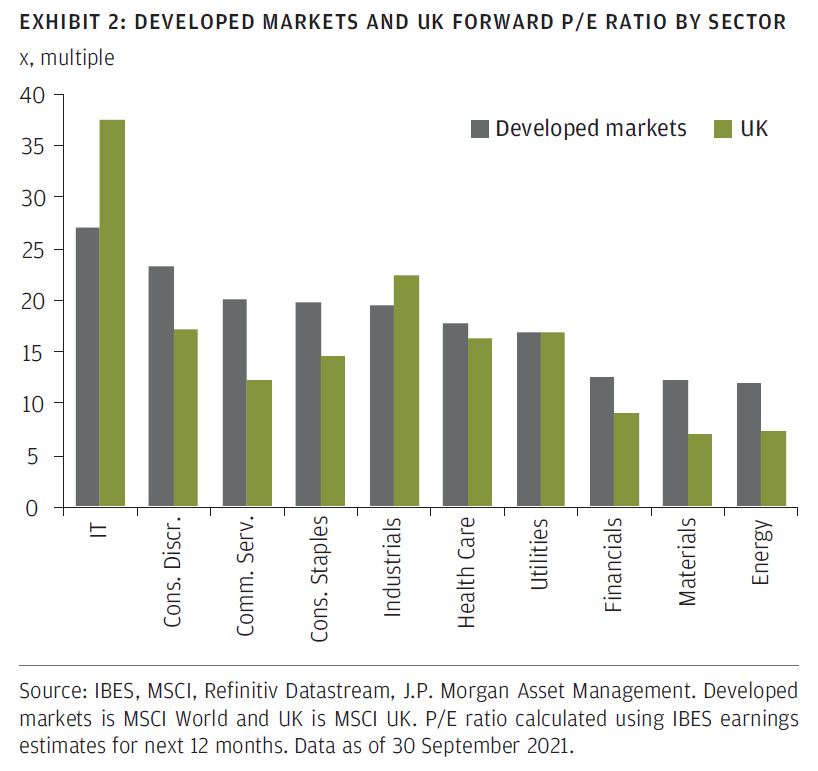 As has been noted this year, Merger & Acquisition (M&A) activity within the UK has been notably higher than in any other developed market in 2021, as private equity firms are drawn to outstanding businesses at very attractive valuations. We see these as good signs for the UK’s outperformance in coming periods.