As we hoped in last month’s commentary, December saw news flow around the Omicron Covid variant turn more positive, as South African medics and scientists pointed to mounting evidence that the strain was decidedly milder and leading to entirely manageable health outcomes.

Covid implications on the Financial Market

New case numbers initially skyrocketed in South Africa to an all-time high peak, but then collapsed equally quickly as the first chart below shows, with the second chart showing hospitalisation numbers rolling over far below previous highs:

A similar scenario appears to be playing out in the UK and the rest of the world; helped no doubt by high levels of vaccination and previous infections. The UK alone has administered just over 36 million booster jabs over the last 2 months, with the US up at nearly 77 million.

As also mentioned last month, the positive news hasn’t stopped European countries in particular from reimposing draconian restrictions on their populaces; from full lockdowns to vaccine mandates and travel restrictions. Frustrating inconsistencies remain between UK nations, making it difficult for businesses to plan ahead and fully recover, with frustrations increasingly visible. The situation has not been helped by revelations of illicit partying by the same policymakers responsible for the last two years of restrictions.

China remains an outlier in terms of its Covid management, preferring to stick to a harsh, zero-tolerance policy which continues to disrupt regional and global supply chains. There is little chance of any relief from this policy in the foreseeable future, with President Xi keen to host a successful Winter Olympics in February, but the country is increasingly isolated in its approach to Covid. Just in the last week, the major port city of Tianjin has been plunged into a strict lockdown with sections of the city not allowed to leave their homes at all, and transport links to the rest of the country severed.

Bearing this in mind, in a reversal of November’s market action developed market equities rallied particularly strongly through the month, with government bonds selling off aggressively after last month’s gains. In Pound terms, US and UK equities were strongest, rising by 3.8% and 3.0% respectively, while European equities were further back (2.2%).

Emerging Market and Asian equities were laggards again, falling by 1.3% and 1.0% respectively, ending what has been a poor relative year with a whimper. The prospect of further Chinese monetary and fiscal policy easing moving into 2022 brings hope of a stronger year ahead, as do equity valuations for the region now being commensurately lower than this time last year:

UK government bonds were weak in December after performing strongly in November. Conventional Gilts fell by 2.4% and Index-Linked Gilts by 5.8%. Both asset classes have exhibited high levels of volatility in recent quarters; something we expect to continue as central banks embark on a tightening cycle: 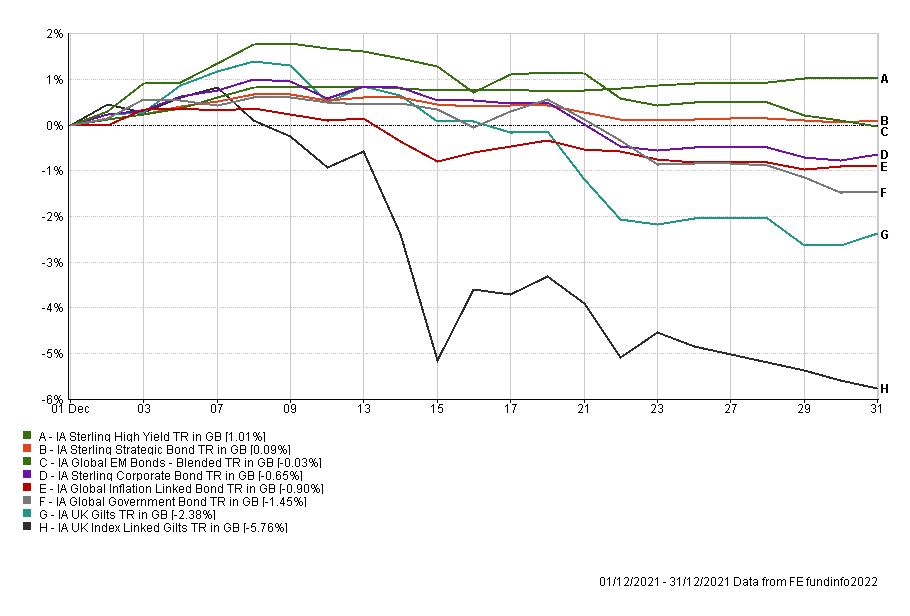 2022 has seen a rocky start for equity markets, and looking ahead, fiscal and monetary tightening globally could see heightened levels of volatility persisting. As always, we seek to remain well diversified by geography and strategy, with exposures to multiple themes, including hedges should the status-quo in markets shift in a different direction.