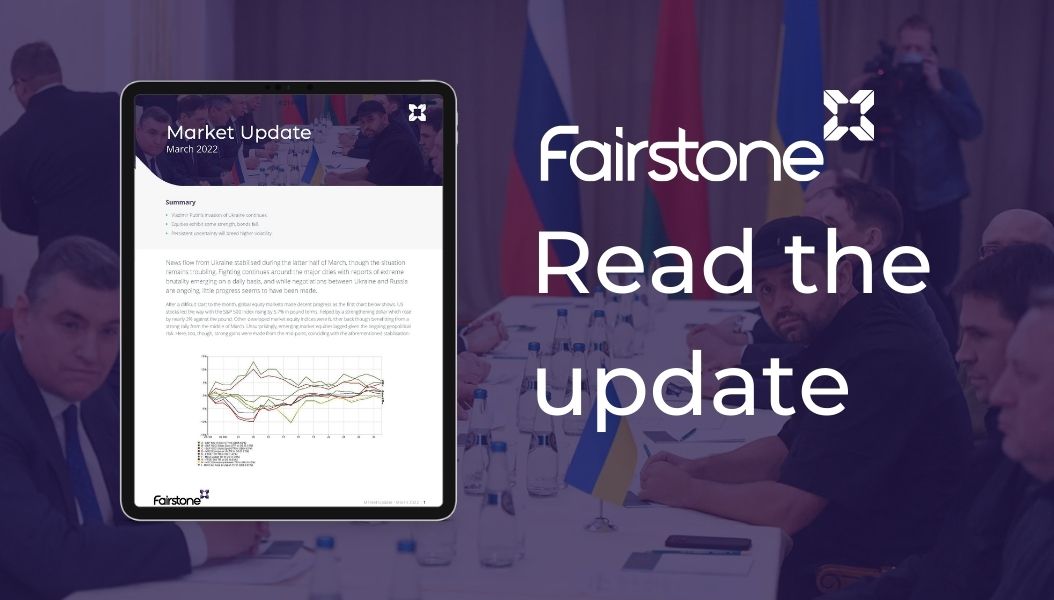 News flow from Ukraine stabilised during the latter half of March, though the situation remains troubling. Fighting continues around the major cities with reports of extreme brutality emerging on a daily basis, and while negotiations between Ukraine and Russia are ongoing, little progress seems to have been made.

After a difficult start to the month, global equity markets made decent progress as the first chart below shows. US stocks led the way with the S&P 500 index rising by 5.7% in pound terms, helped by a strengthening dollar which rose by nearly 2% against the pound. Other developed market equity indices were further back though benefitting from a strong rally from the middle of March. Unsurprisingly, emerging market equities lagged given the ongoing geopolitical risk. Here, too, though, strong gains were made from the mid-point, coinciding with the aforementioned stabilisation: 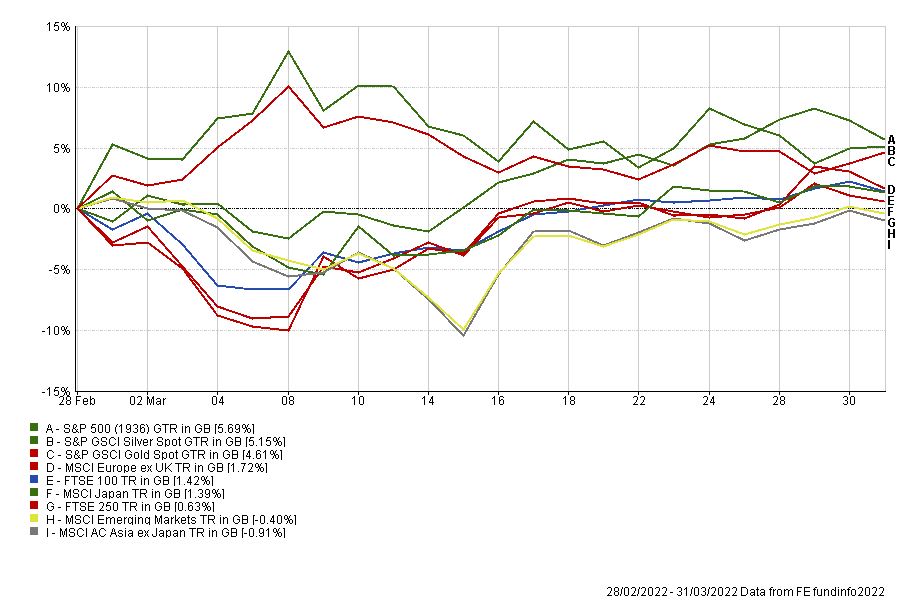 Bond market returns directly contrasted those seen in equities. Safe havens gained in the first 10 days of March before aggressively giving those gains up. Sharp drawdowns were seen particularly in government bonds as the chart below shows, with Gilts falling by just over 5% from peak to trough, and index-linked Gilts by nearly 10%. These losses were driven first by the lack of escalation in Eastern Europe, and then exacerbated as investors turned their attention back towards rapidly pivoting central banks which find themselves increasingly behind the curve on the inflation front: 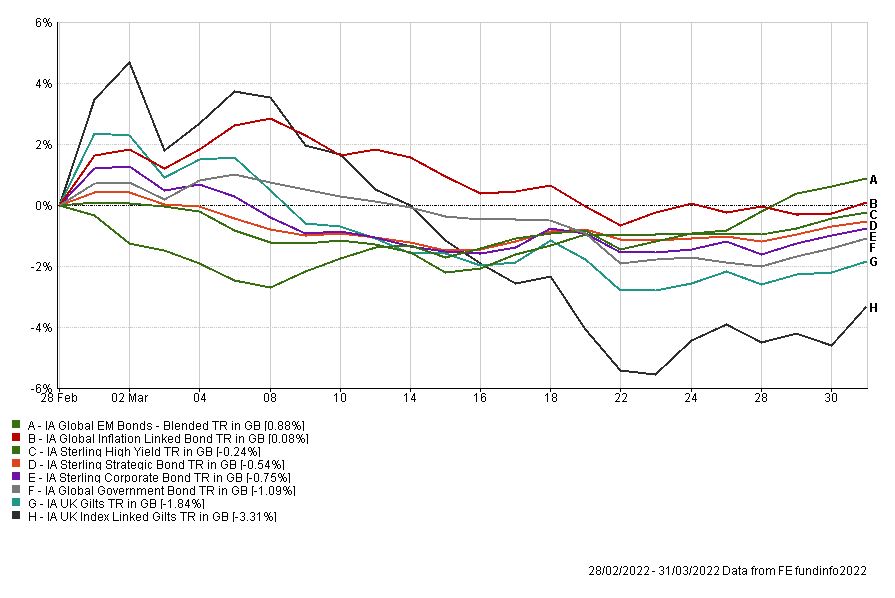 The US Federal Reserve in particular has only become more hawkish in its latest public remarks. CPI sits at the highest level since the 1980s at 7.9% while the labour market remains strong. The unemployment rate fell to 3.6% in March – the lowest since February 2020 – and the participation rate rose to 62.4%. After beginning their rate hiking cycle with a 0.25% move, commentators now expect a more aggressive pathway involving consecutive 0.5% rate rises in May and June before ending the year above 2%.

As this information is priced into markets and expectations, indicators of recession risk have been rising, with participants showing concern around the speed of rate rises and their potential impact on growth. The chart below for example shows two measures of US government bond yield curve steepness that have traditionally been useful for forecasting recessions. When these approach and pass through the zero bound to the downside, they indicate dampened growth and inflation expectations on a forward-looking basis as a result of heightened shorter-term interest rates.

Though useful, their lead times from inversion to recession have been highly variable, ranging from around nine months to nearly three years, but despite this it has been foolish to ignore the importance of their warning on almost every occasion going back many decades: 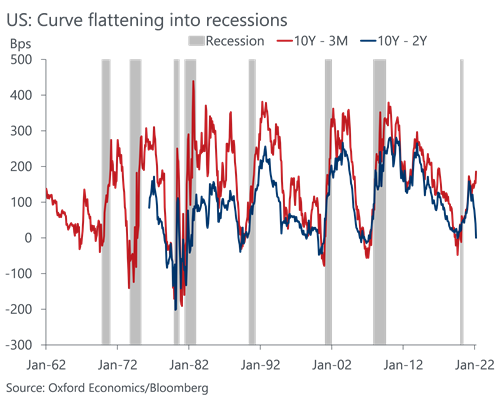 The situation is more difficult in Europe where the same inflationary pressures are apparent, but within an environment much more exposed to negative externalities stemming from the Russia/Ukraine crisis. These have already resulted in heavily dampened growth outlooks and worsening consumer sentiment, meaning that any hawkish central bank behaviour will be coming even as conditions are worsening – a poor combination: 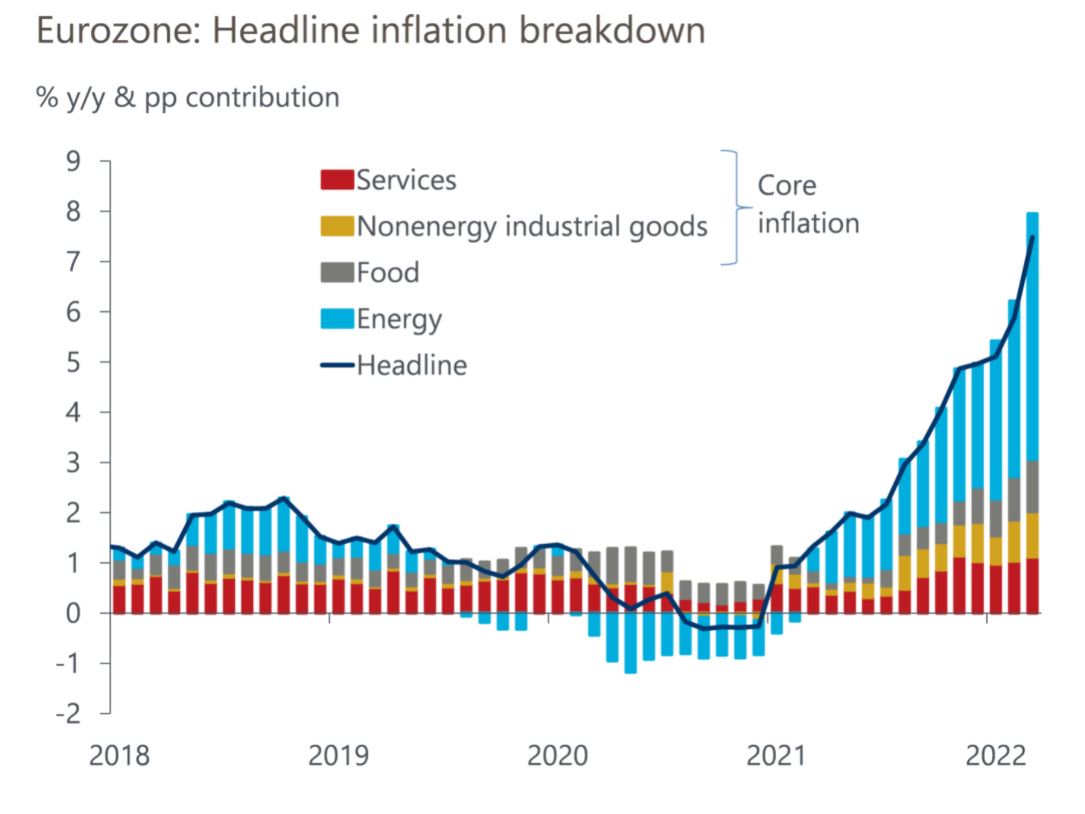 For now, forecasts are generally to the downside, particularly looking to next year, but commentators in this space are at pains to point out that all have very large margins of error to the up and downside given uncertainties.

Similar to last month, looking at financial markets, uncertainty will reign until a genuine improvement occurs in Europe. High levels of volatility are likely to persist with a swathe of commodity prices likely to remain elevated. In this environment we would continue to favour ‘real’ assets linked in some way to inflation or inflation expectations – in this case particularly commodities. As always this speaks to the importance of diversification across portfolios. 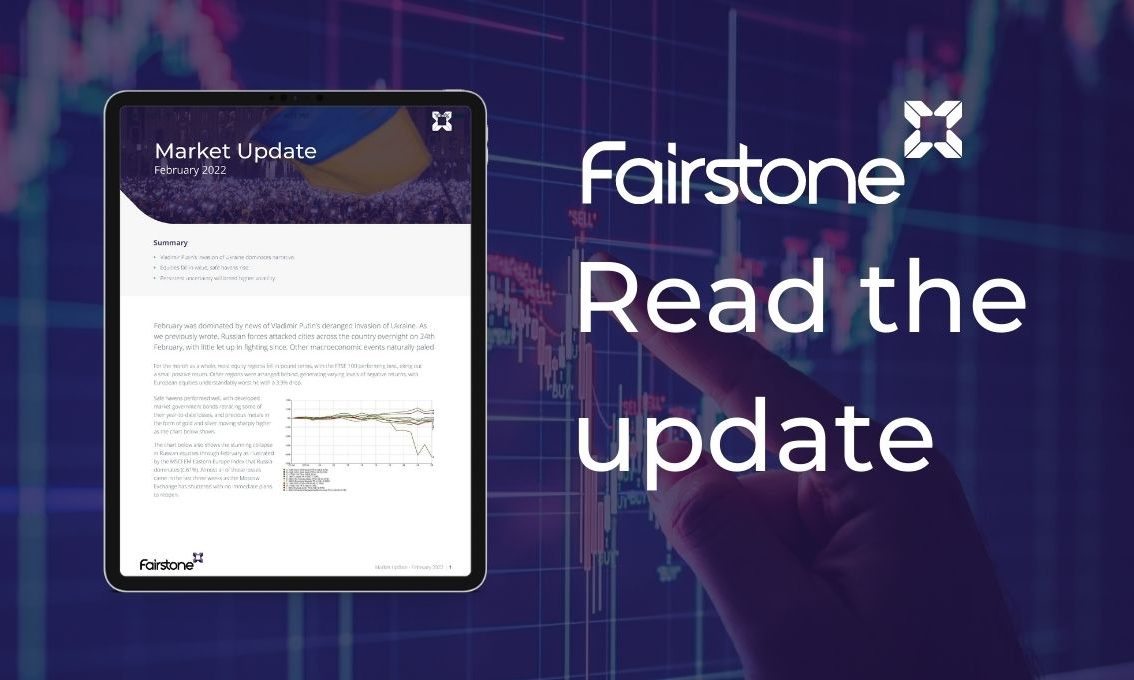 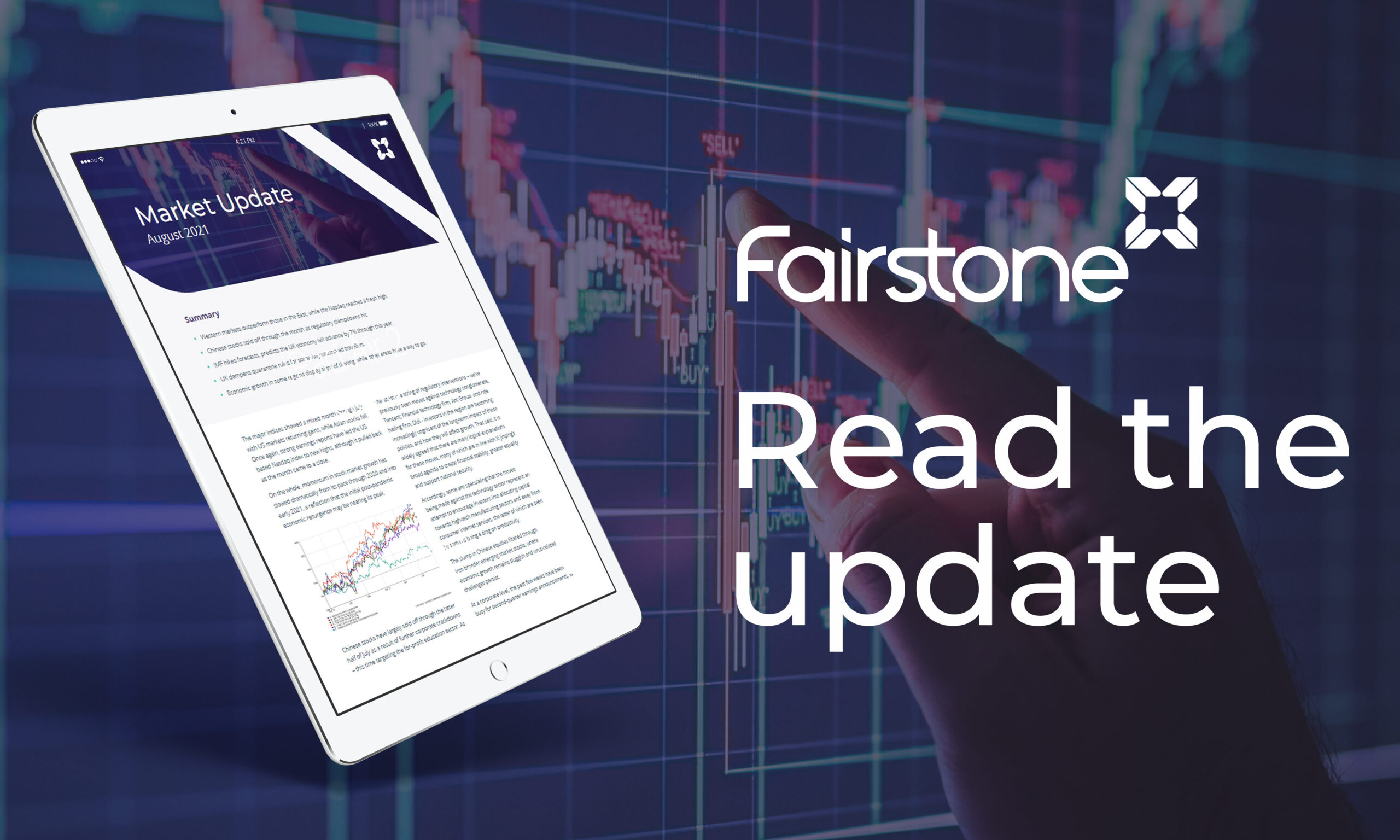 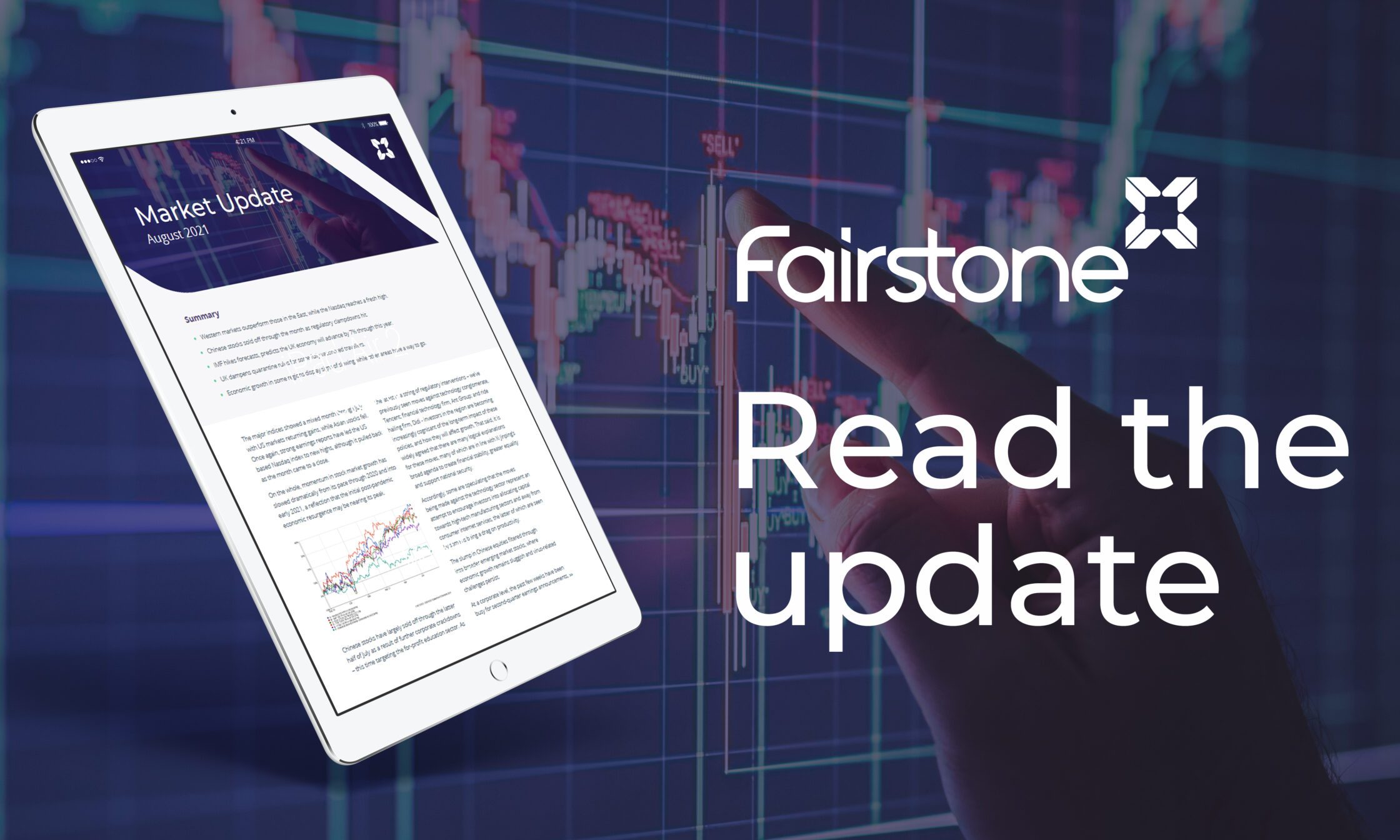